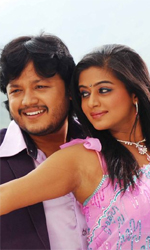 `Eno Onthara` - been there, done that (IANS Film Review)

Eno Onthara has remained faithful to its Tamil original Kushi, starring Vijay and Jyothika, which was directed by S.J. Surya. While Kushi was a big hit, its Telugu remake of the same title was a blockbuster. However, the Hindi remake of this film (Khushi`) with Fardeen Khan and Kareena Kapoor, was a big flop.

The Kannada remake comes after a gap of more than 15 years since the original film was released, and is evident in many places. For example, most of the time, the lovers speak on landline telephones, which is a rarity in today`s 3G world.

In a way, Eno Onthara sticks to the original pattern of narration. Despite its dated storyline and fairly long climax, one can really enjoy this film, if one is not too bothered by seeing a remake.

The movie appeals mainly because of the love element. Comedy, emotion and confusion too have been packaged in the right proportions.

The film`s lead pair Ganesh and Priyamani have a fantastic on-screen chemistry. Many sequences are absolutely hilarious.

One problem, however, is that many sequences look dated, as some scenes have already been shown in Kannada films like Chandu and others. Some of the sequences are amateurishly executed.

Speaking of the story, Surya (played by Ganesh) comes to Mysore for his studies and meets an assertive and extremely confident Madhumathi (Priyamani). They become good friends, after some initial hiccups.

But both of them are ego-centric, which creates a rift between them after a small incident (which looks utterly laughable, though). But the duo want to help two of their friends who want to get married. They succeed in their endeavour. But what happens to Surya and Madhumati`s relationship forms the rest of the story.

Veteran actor Srinivasa Murthy scores with his skills, while Sharan has succeeded in tickling the funny bone.

Jai Jagadish and Vijayalakshmi Singh have performed with ease. However, Hari Krishna and Doss are the real heroes of the film, while the director Mussanje Mahesh shows his lack of originality.

Apart from Ganesh fans, who would find his role endearing, Eno Onthara is a good one-time watch.