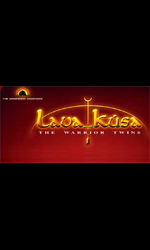 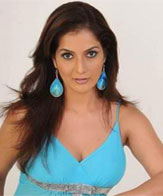 The world knows the story of Luv and Kush, the son`s of Rama, as a suffix to Ramayana. In reality it is a correcting rejoinder to Ramayana, where Ram, with an imperialist mindset to subjugate all other kingdoms, starts the Ashwamegha Yagya. The only one who stand up and resist his army, are his own teenage sons, born from a wife he had ruthlessly discarded during her pregnancy.

The kingdom of Ayodhya, challenged by Lava and Kush, shamelessly sends one brave warrior after another. After Shatrughan is defeated, Laxman goes. When even he falls, Ram himself takes up the challenge, but for the intervention of Sita in the end.

This ancient story is well known. But what is not looked into is the transformation of Ram, the hero of Ramayana, into an arrogant villain ready to fight even kids for the preservation of his vanity. This animation film stays true to the original story, and its release now, considering the fears of communal tensions flaring up in the name of a Ram temple in Ayodhya, is timely.

Though touted as the most expensive 2D animation film in India, it lacks global animation standards. Yet, compared to animation films in India, both in terms of story and animation, it is a far superior and successful attempt.

Arun Govil, who played the role of Ram in the serial Ramayana, gives the voiceover for Ram in the Hindi version of this film. Dara Singh`s son Vindoo Dara Singh takes over the voice of Hanuman from him.

Another highlight of the film is its music by the late L. Vaidyanathan, who sang and gave the music for Malgudi Days, and passed away just after composing for the film. The songs sung by stalwarts like Yesudas, Shankar Mahadevan and Sadhana Sargam are devotional and melodious.

The film is also a two-in-one package, as the entire story of Ramayana is recreated in its songs. However, to a keen observer, this adds to the unintended satire on Ram, that while the songs eulogise Ram, what he does with his own wife based on a stray comment by a subject and his willingness to fight children, makes him out not to be the ‘Maryada Purushottam Ram` (the best upholder of values Ram), but a vain, arrogant and ruthless king.

Hindu fundamentalists in India who are usually up at arms against anyone desecrating Ram`s name, cannot do anything as it is based on the well revered story of Ram`s own sons and his actions.

Though the film misses many nuances and emotional moments, its release at this time will hopefully remind everyone that man, even if it is the reincarnation of god, is faulty. And there is no greater stupidity than using the name of such a faulty god to cause violence.

The Kanipakam creations in association with RVML animation studios is producing its first full length 2D feature film “Lava Kusa the warrior twins”. This cinematic version of Lava Kusa is adapted from the great epic Ramayana. The film depicts the adventures and the determination of the twins showing them as true warriors.

Lava and Kusa were born to mother sita at Sage Valmiki’s hermitage; they grew up learning the essence of Ramayana and master the art of war by using divine weapons from the guidance of Sage Valmiki. The story goes on with their thrilling childhood experiences blended with action, comedy and enchanting magical powers. The role of gigantic falcon, squirrels, monkeys, rabbits and tortoises delights not only the children but also to all age groups.

On invitation the twins set off to Ayodhya to recite Valmiki Ramayana in front of the King Rama. The story turns gripping as the twins learn that Matha Sita was sent to vanvas by lord Rama. They return from Ayodhya with anger and rage over lord Rama.

Lord Rama performs Aswamedha yagna for the prosperity of his kingdom and sets off a horse (ashwa), which encounters with Lava Kusa finally. The twins happen to read the declaration of Lord Rama inscripted in a golden plate on the forehead on the horse, arrests the horse considering that this would bring Lord Rama in front of them so that they can question him regarding the ill treatment given to Mata Sita and to debate on Lord Rama’s most acclaimed principle of dharma.

They arrest the Aswamedha horse thus inviting the mighty Ayodhya Empire to a war against them. The story gets in to a fast paced array of battles packed with scintillating/thrilling action sequences blended with spell bound visual effects. Lava Kusa defeats the two brothers of Lord Rama, Satrugna and Lakshmana thus bringing Lord Rama against them face to face in the battle field. Debate concludes with the start of war leading to both of them inevitably about to use the most dreaded weapons against each other. Hearing this Sita and Sage Valmiki enters the battle field and reveals the truth to Lord Rama that these twins Lava and Kusa are his own sons.

Lord Rama affectionately accepts the twins and praises their courage, request sita to return to Ayodhya. Sita refuses and recedes to the lap of her mother Bhoomatha (the goddess of earth) and merges in to the earth. Lord Rama announces Lava Kusa as the crown princes of the Ayodhya kingdom.

This saga of Lava Kusa is also a Musical enchanter with songs depicting the legend epic Ramayana sung by eminent singers of our country with catchy tunes. Truly a balanced blend of action, comedy and values which will make “Lava Kusa the warrior twins” stand out exceptionally as a classic family entertainer. 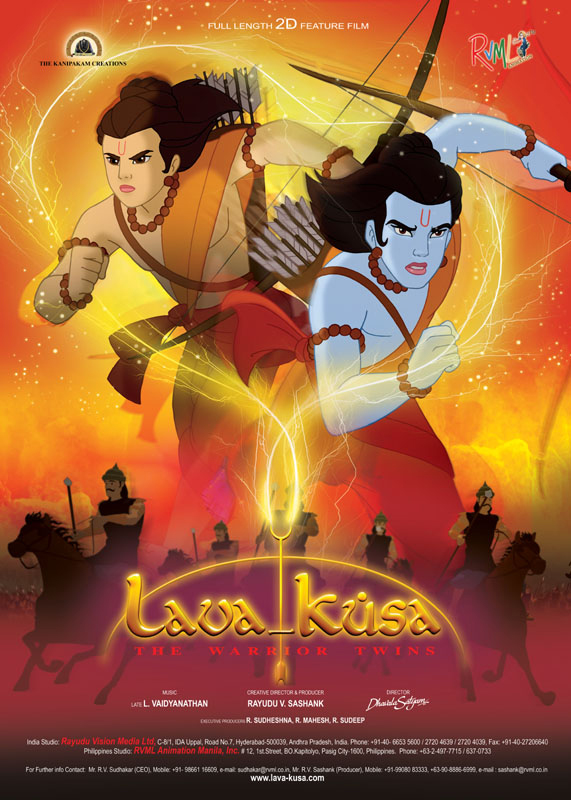