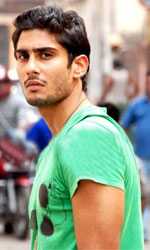 Every year literally hundreds of thousands throng to the city of dreams, Mumbai. To cover so many dreams in a small span of an-hour-and-a-half calls for some brilliant filmmaking. And watching "Dhobi Ghat" will make you realise that there indeed have been very few debuts as stunning as this one.

"Dhobi Ghat" is the story of five characters - Yasmin (Kirti Malhotra), Arun (Aamir Khan), Shai (Monica Dogra), Munna (Prateik Babbar) and the city of Mumbai. After a one night stand with Arun, who is a painter, Shai, an investment banker from America and an amateur photographer, obsesses over him, while her dhobi Munna pines for Shai.

Arun, meanwhile, discovers a few tapes in his flat from the previous tenant and, watching them, falls in love and find a muse in the woman who has made them - Yasmin. Each of the character is thus looking for something in one another, while the fifth character, Mumbai, simply stares blankly at them without comment or prejudice.

One of the best things about the film is its casting. Each of the actors complement the film, its director, and the city of Mumbai perfectly. Each is believable in his or her own garb. Prateik is bound to become the heartthrob of the generation, while Kirti Malhotra`s innocence has to be seen to be believed. Real life singer Monica brings out the uncertainty of her character beautifully.

The only one who is a little out of place, and hence the small sore point of the film is actor Aamir Khan. He begins shakily and is self conscious, unable as he is perhaps of shaking away two decades of Bollywood`s acting baggage. By the end of it though, he manages to get into the film`s rhythm and gives a believable performance.

It is hence not Kiran Rao`s luck that she got superstar husband Aamir to act in the film, but Aamir`s luck that he is in this film, which will go down in the history of cinema as one of the best character sketches of a city and its people. Very few people in the world have sketched any city with such tender love, care and affection. And to add to the lilting melody that is Mumbai in the film is composer Gustavo Santaolalla who gives a haunting background score.

Director Kiran Rao brilliantly manages to find a physical representation of Mumbai city, in the old woman who blankly stares at all the characters, but says nothing. The metaphor is simple but powerful - Mumbai is a dying, decaying city, but one that is definitely alive and watches over all.

And like the character of Arun who becomes a voyeur into the life of Yasmin, it is Kiran Rao that has played voyeur on the city of Mumbai.

Another good thing about the film is that nowhere does it slacken or lose pace. On the contrary, it unfolds almost like a mystery, like a rose bud, only to scintillate the senses in full bloom. It thus might become the low budget indie Indian film that will finally make money like big-budget Bollywood fare.

In the end though, that wouldn`t matter much to the audience who will find themselves somewhere in the film. Each one of the characters in the film is like Mumbai, and Mumbai is like each one of us who inhabit it.

Managing Aamir Khan was like winning a lottery: Advait Chandan

From working behind-the-scenes on various movies under Aamir Khan Productions to managing Aamir Khan's calendar and now to directing the superstar, Advait Chandan has come a long way. He considers the banner his "film school" and says being a manager to the actor-producer was like a lottery ticket for him.Read More

Actor Prateik Babbar calls himself a "fashion experimenter". He says he doesn't care much about fashion police as he believes that everybody has a unique statement to make, which doesn't mean one has to be liked by everyone.Read More

Dhobi Ghat (Mumbai Diaries) is the story of four people from very different backgrounds, whose worlds intersect and leave them forever altered. As they find themselves drawn into compelling relationships, the city finds it`s way into the crevices of their lives, separating them even as it brings them closer. Fragments of their experience - seen through a naive video diary, black and white photographic images and painting form a portrait of Mumbai and it`s people bound together as they journey through longing, loneliness, loss and love.