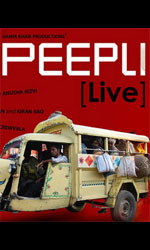 It is a miracle that a script like "Peepli Live" has been turned into a movie and has got a commercial release. It is certainly surprising that a mainstream filmmaker like Aamir Khan decided to invest money in a movie that puts the spotlight on grave issues like the plight of Indian peasants.

And, of course, kudos to journalist-turned-director Anusha Rizvi for penning down a story that focusses on rural India and its problems at a time when most Bollywood filmmakers are busy luring NRI audiences with mindlesss comedies and designer dramas.

According to a report, 200,000 farmers have ended their lives since 1997 and it is said that the rise in indebtedness is the root cause of farmer suicide. Anusha`s directorial debut follows this theme in "Peepli Live" - albeit as a satire.

The film also takes a look at how media and politicians use such tragedies to up their TRPs and votebanks respectively. The real issue dies under their rat race.

Set in a small village, the film follows the plight of a farmer`s family. Natha (Omkar Das) and Budhiya (Raghuvir Yadav) are brothers who had taken a loan against their land. Their only source of livelihood is put under the hammer when they fail to repay the money.

They try to seek the help of a local politician, whose job is to serve the people. But he shoos them away saying the government gives compensation to the families of those farmers who commit suicide. Initially, the brothers ignore the suggestion, but Budiya convinces Natha to sacrifice his life for the sake of the family.

It`s election time in the region and a local newspaper owner sends his reporter Rakesh (Nawazuddin Siddiqui) - who otherwise doesn`t want to budge from his comfort zone in search of stories - to the village. Rakesh comes to know of Natha`s decision to end his life and reports it.

The news creates a sensation in the political arena and before it can be brushed under the carpet, somebody gives the lead of the Natha story to Nandita Malik (Malaika Shenoy), an elite English channel journalist. She grabs the opportunity and dashes off to Peepli as the news promises good TRPs.

As soon as her report is flashed comes an avalanche of reporters to the village and there begins a media circus as every journalist vies to sensationalise the issue.

Rakesh, who actually filed the story, becomes a mere puppet in the hands of Nandita and when he tries to tell her about another farmer`s death, she refuses to report it as she doesn`t see it as a TRP booster for her channel.

The irony is that nobody - be it reporters or politicians - tries to know why Natha decides to take his life. In fact, no one is interested in solving his problem as they have their own agendas.

"Peepli Live" is a satire that shows the reality behind media houses, politicians, bureaucrats and their apathetic approach towards problems. But the script is written in a such a manner that it makes the audience laugh.

India promotes itself as one of the fastest growing economies in the world, but the film shows the miserable condition of farmers who continue to end their lives after living in extreme poverty. A report says the highest level of farmer suicides has been reported in Vidarbha, Maharashtra - reportedly 4,000 farmer suicides per year. In recent times, farmer suicides in Chhattisgarh have been hogging the limelight as well as in Punjab.

First time director Anusha has not only written a taut script but also executed the story effectively. It seems the film is her attempt to enlighten viewers about the social dilemma that our country is facing and her experience as a journalist is quite visible in her storytelling.

The actors -- from Omkar Das, Raghuvir and Shalini Vatsa as Natha`s short tempered wife Dhania to Malaika Shenoy and Vishal Sharma -- are brilliant too.

If Omkar and Raghuvir bring forth the sufferings of farmers, Shalini, an M. Phil from Jawaharlal Nehru University, should be applauded for playing the role with such ease and perfection. Malaika and Vishal fit the bill of English and Hindi channel reporters respectively.

Anusha blends the miseries of farmers and subsequent political and media reactions seamlessly in "Peepli Live" and that makes it a must watch.

Nawazuddin never had interest in a hero's role

Actor Nawazuddin Siddiqui, who now plays the lead role in most of his films, says that he never wanted to play the typical hero as a person with no bad qualities doesn't exist.Read More

Natha a poor farmer from Peepli village in the heart of rural India is about to lose his plot of land due to an unpaid government loan. A quick fix to the problem is the very same government`s program that aids the families of indebted farmers who have committed suicide. As a means of survival Farmer Natha can choose to die!!! His brother is happy to push him towards this unique `honor` but Natha is reluctant. Local elections are around the corner and what might`ve been another unnoticed event turns into a `cause celebré` with everyone wanting a piece of the action. Political bigwigs, high-ranking bureaucrats, local henchmen and the ever-zealous media descend upon sleepy Peepli to stake their claim. The question on everyone`s lips - Will he or Won`t he? As the mania escalates what will be the fate of Farmer Natha; nobody seems to care how he really feels? 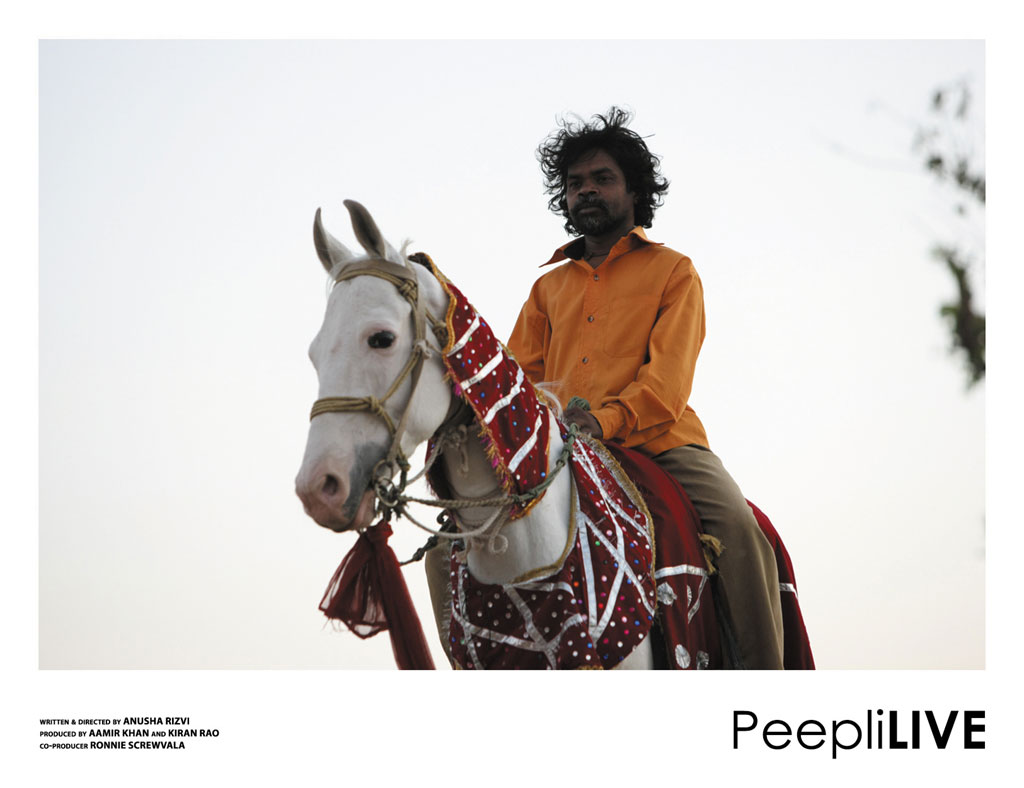 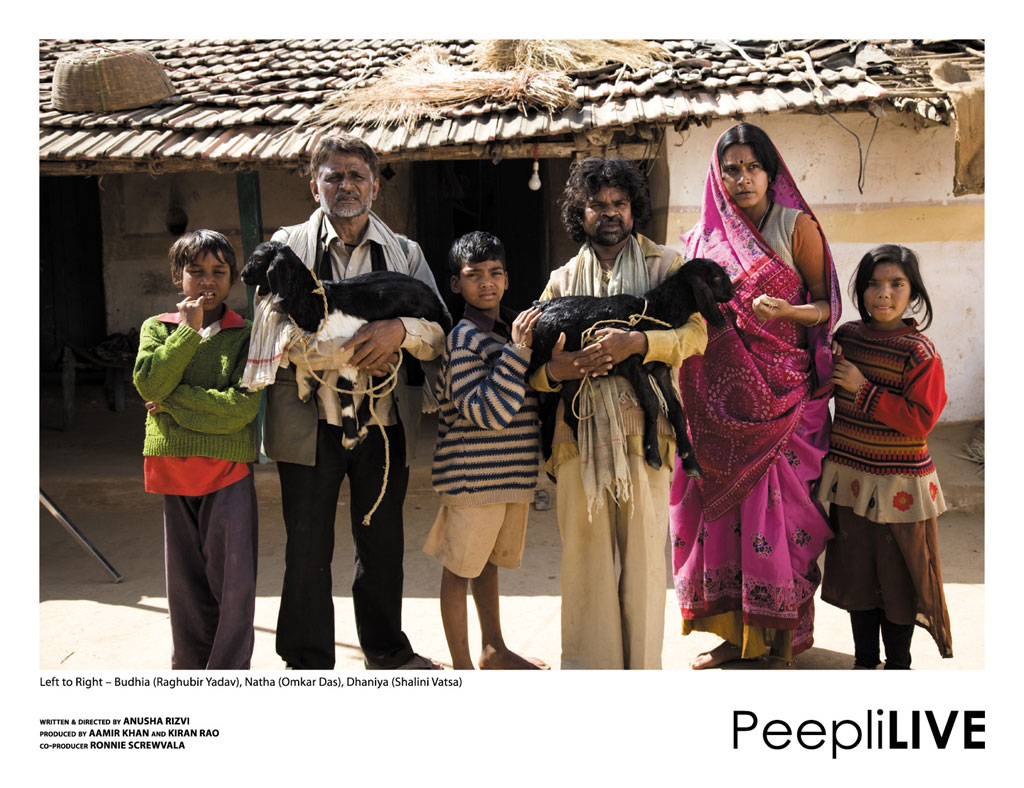 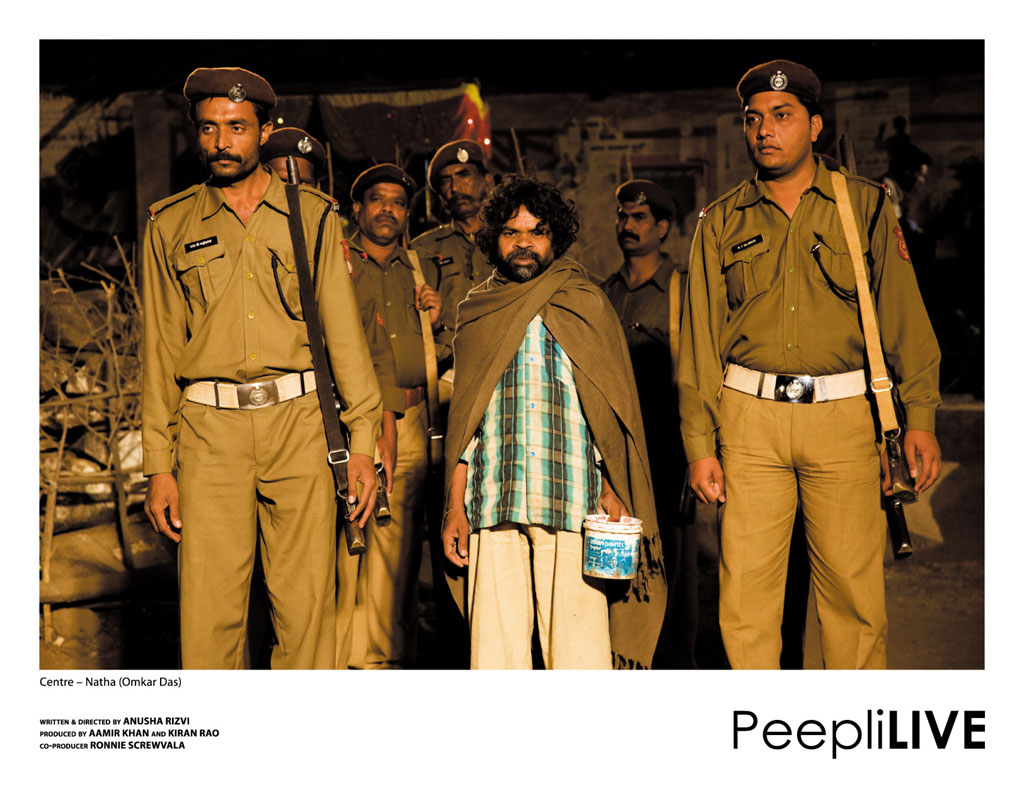 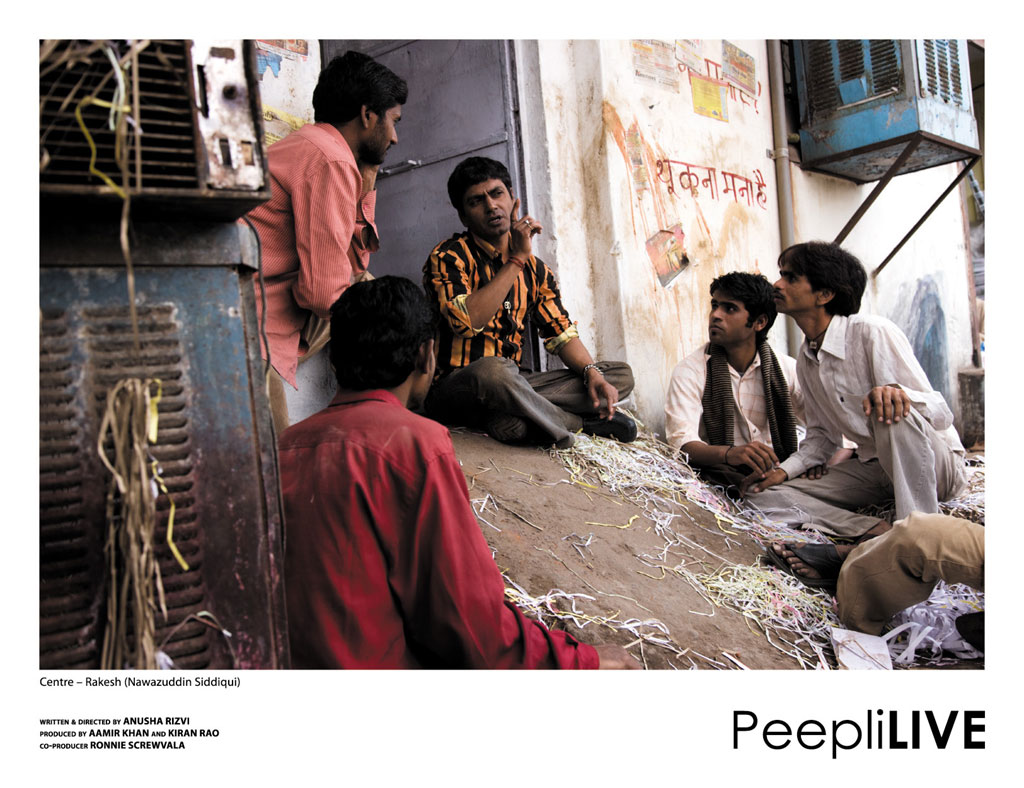 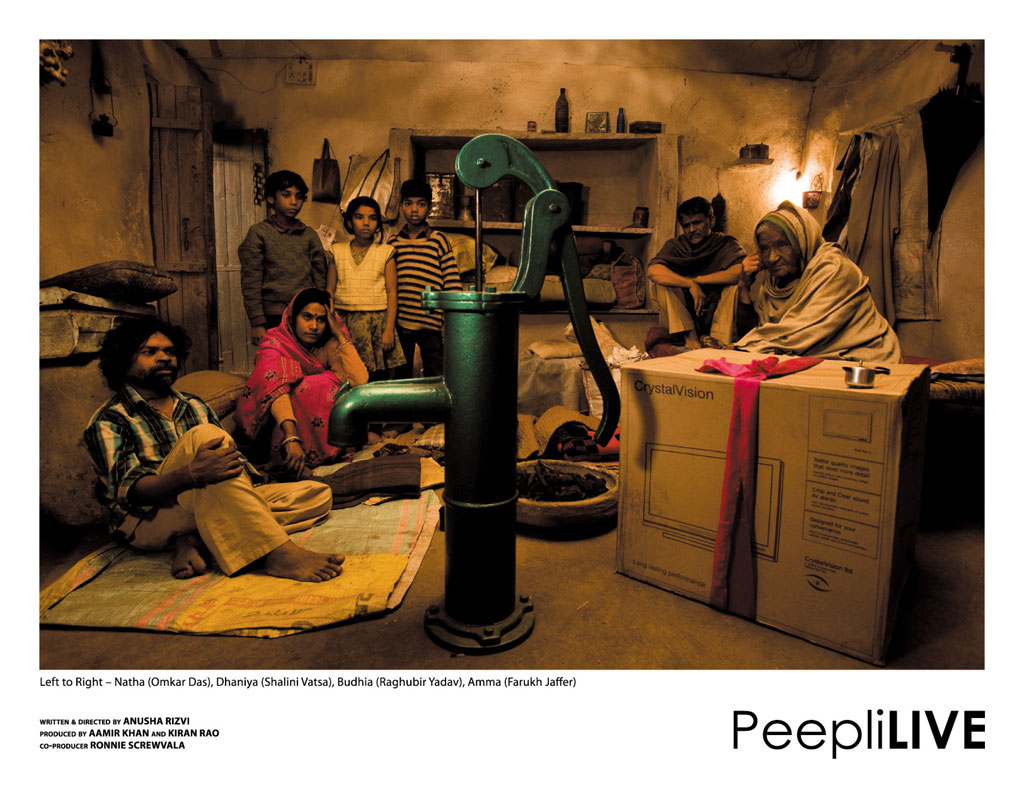 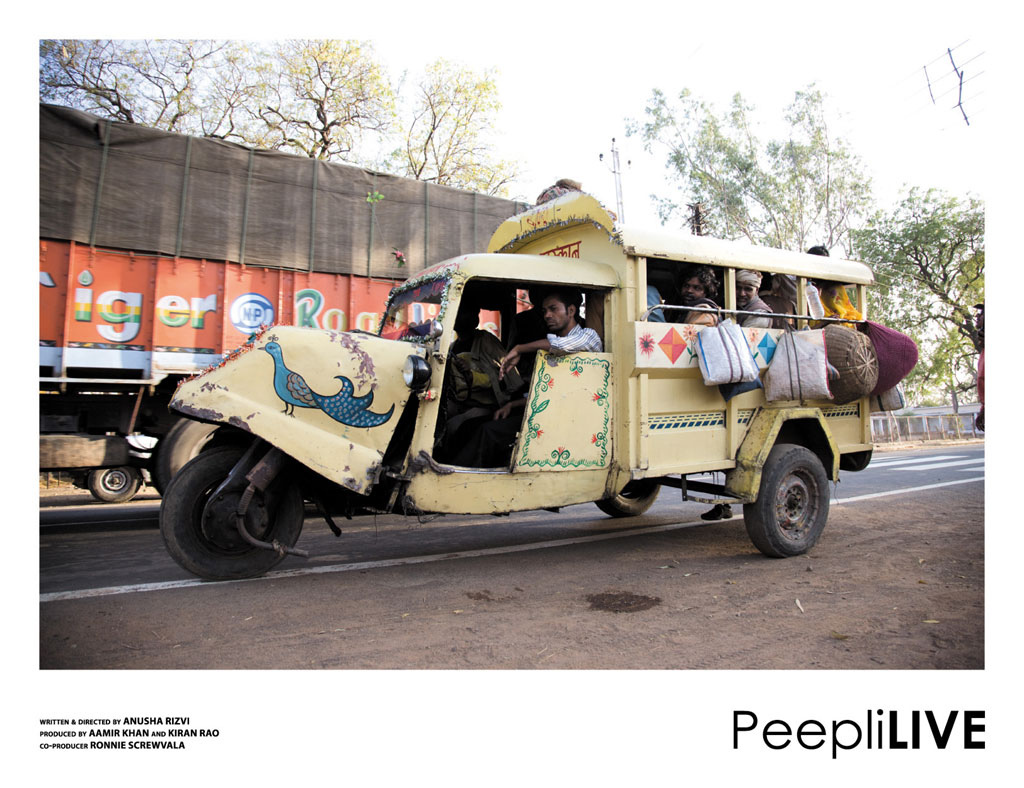