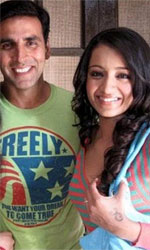 First things first. This is not, repeat not, a comedy. Not by any yardstick. For those expecting a typical Priyadarshan-Akshay Kumar comedy "Khatta Meetha" is not your cup of tee-hee. For those who know there`s a more reflective and ruminative side to both the prolific director and the leading man, here`s the thing.

"Khatta Meetha" takes stinging satirical swipes at the epidemic disease of corruption that has taken over the Indian ethos. Tragically the treatment is quite often heavyhanded. But the statement never drowns in the diatribe. Priyadarshan tends to fill up the outer edges with a profusion of incidental characters and over-elaborate gags and jokes that hold themselves in place in a world of unmitigated chaos like "De Dana Dan".

Here the clutter and the clamour just make you feel the director needed to respect his own tone of sobriety in this longish tickling treatise on malpractices in the middleclass.

The plot is a bit of a tangle. Akshay Kumar`s family of discontented mal-paani-practitioners is a universe of brutish brothers and screechy sisters-in-law, and silently-suffering parents (played by those wonderful actors Kulbhushan Kharbanda and Aroona Irani).

It`s a family of corrupt road contractors and initially, Akshay seems the most wickedly immoral of them all. But hang on! As the narrative - at time plodding - moves forward we begin to understand the wacked - out sinister yet satirical, chaotic yet orderly, corrupt yet weirdly - ethical world of Sachin Tichkule.

Here`s a character that seems to have been written only for Akshay Kumar. And he gets hold of the `muddle` - class morality of Tichkule`s world with delightful earnestness. Frequently Akshay is exasperating in his efforts to explain why the middleclass is in a state of selfdestructive decline. But it isn`t the actor to blame. It is the nature of the material offered to the actor.

The domestic and professional world of Scahin Tichkule is not easy to penetrate. Akshay, demonstrating a primetime ripeness in his body language and repertoire of Chaplinesque expressions, enters this wacky wounded world of the exploited and the damned with extraordinary empathy.

Akshay`s is a performance that is far more accomplished than it may seem to the popcorn province. He`s exasperating in his directness. He`s partly a cartoon character, partly an emblem of our times and wholly entertaining in his chaotic comprehension of the inadequacies of world we`ve inherited from the freedom fighters and brutally disfigured.

But alas. Akshay`s character is much much too wordy in his tongue type. The hallmark of Charlie Chaplin`s social comment was his silent expressions of protest. Akshay`s character and the film on the whole are much too verbose. The characters are constantly talking, as though not speaking would take away the audiences` attention. A film making a social comment didn`t have to over-state its case so blatantly.

But the words do not cut into the narrative`s basic flow of tongue-in-cheek satire. Some sequences such as the one involving the steamroller and the elephant consume too much footage. The art of understatement eludes this political statement.

Trisha Krishnan in wearing chunky ear-rings makes an unusual debut. She is different from the short-skirted hotties. But whether that difference makes a difference in Hindi cinema, time will tell.

"Khatta Meetha" stands tall in its message of restoring a semblance of moral order in the middleclass. The last half-hour after Sachin Tickule`s sister is murdered, is thoroughly gripping. And the fight between Akshay and the corrupt goons in the crowded lanes is chilling in its realism.

Realism is a remotely but decidedly obtainable component in this parodic parable on the rotten fruits of excessively materialistic aspirations in post-Independence India.

Technically polished and many notches superior to Akshay Kumar`s other recent entertainers "Khatta Meetha" conveys that sweet-sour taste of a universe that has rapidly degenerated into absolute self-gratification.

See it for what the film leaves unsaid, though that`s hard to do when everyone is ceaselessly talking.

South India actress Trisha Krishnan, who teamed up with Askhay Kumar in "Khatta Meetha", is upset with the media for trashing the comedy.Read More

There is no chance in hell that his dreams will ever come true, simply because he has no money to bribe!

To Make matters worse, the new Municipal Commissioner turns out to be his ex-girl friend (Trisha) who now hates him.

Even as you laugh as Sachin bumbles his way from one disaster to another, the film reveals in a light hearted way, the extent of Corruption and Bribery Rampant in the System. And the engenious means you have to adopt if you want to survive.
Enjoy the bumpy ride! 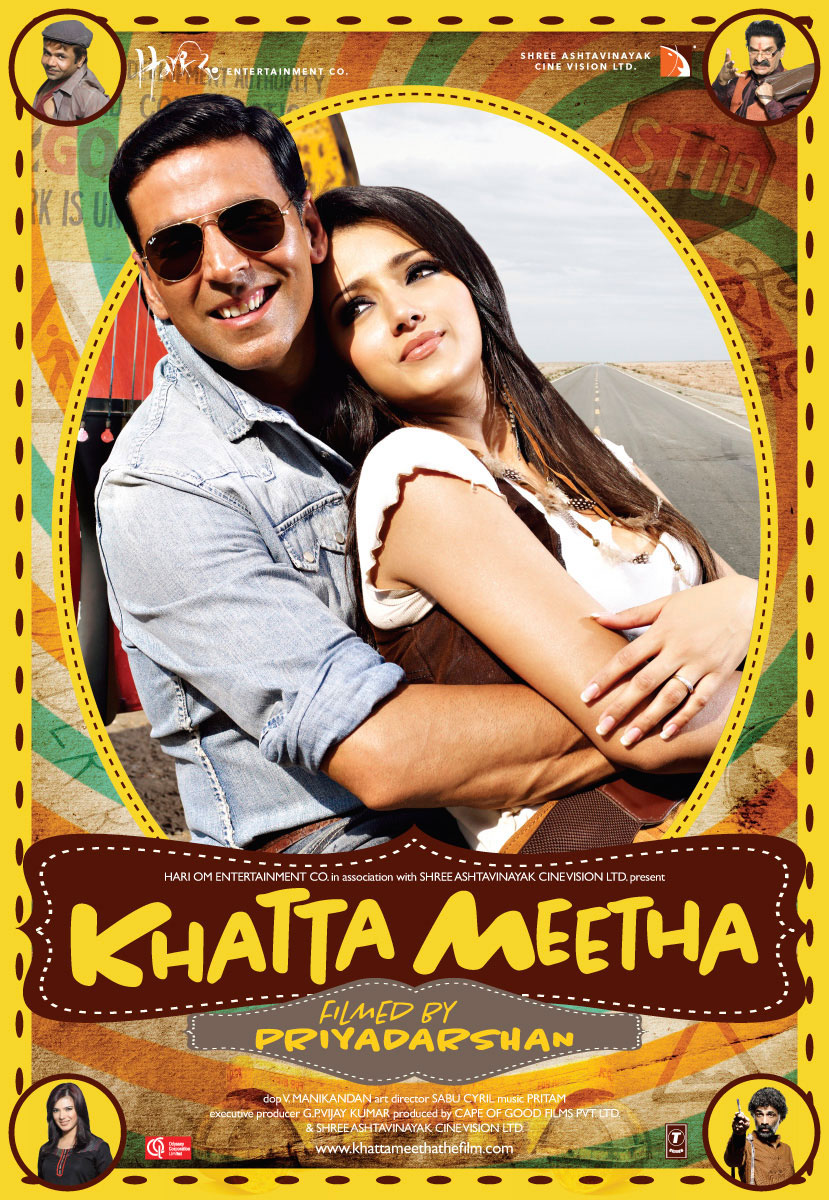 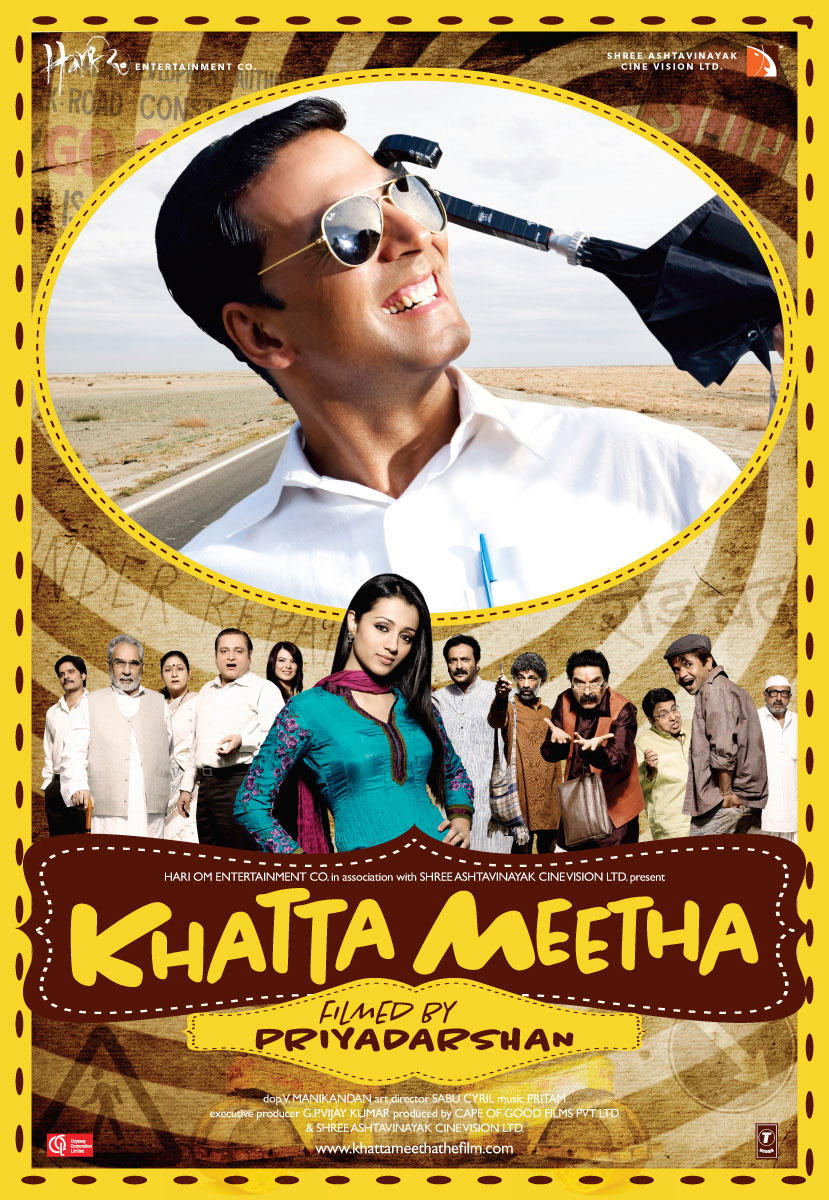 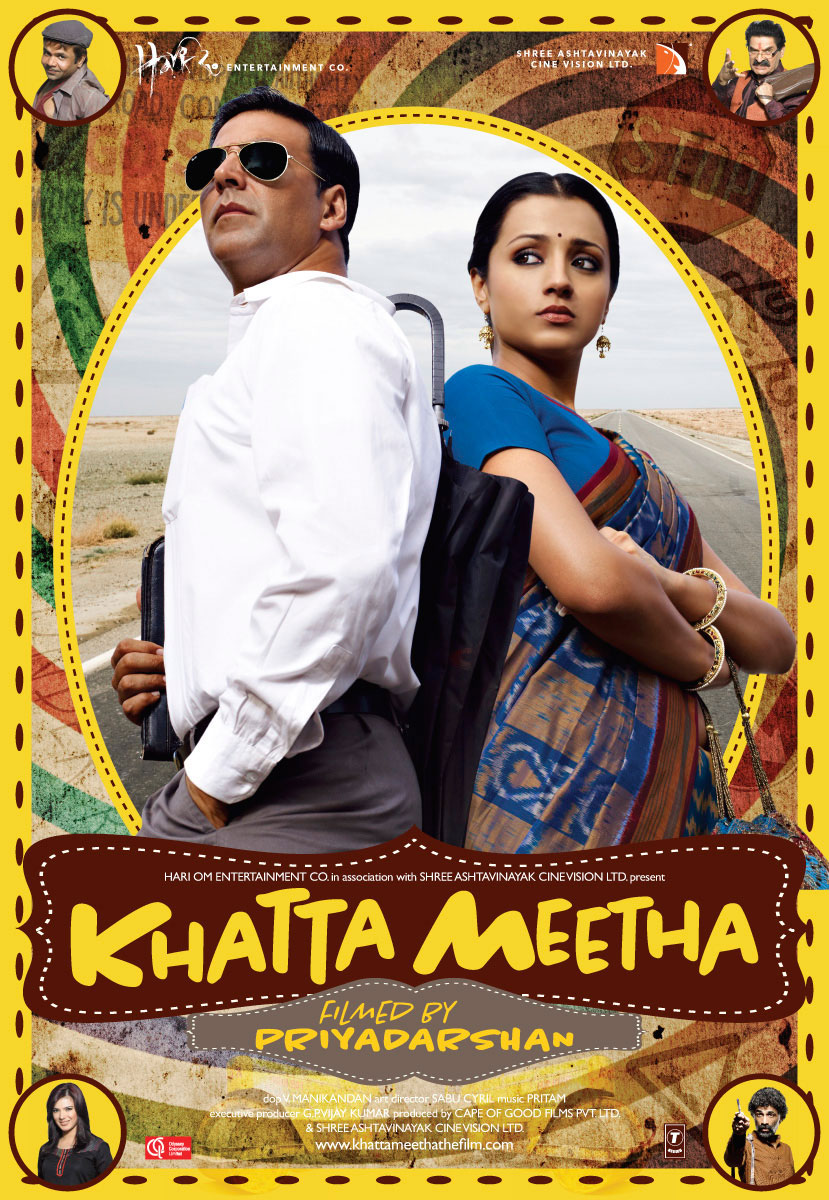 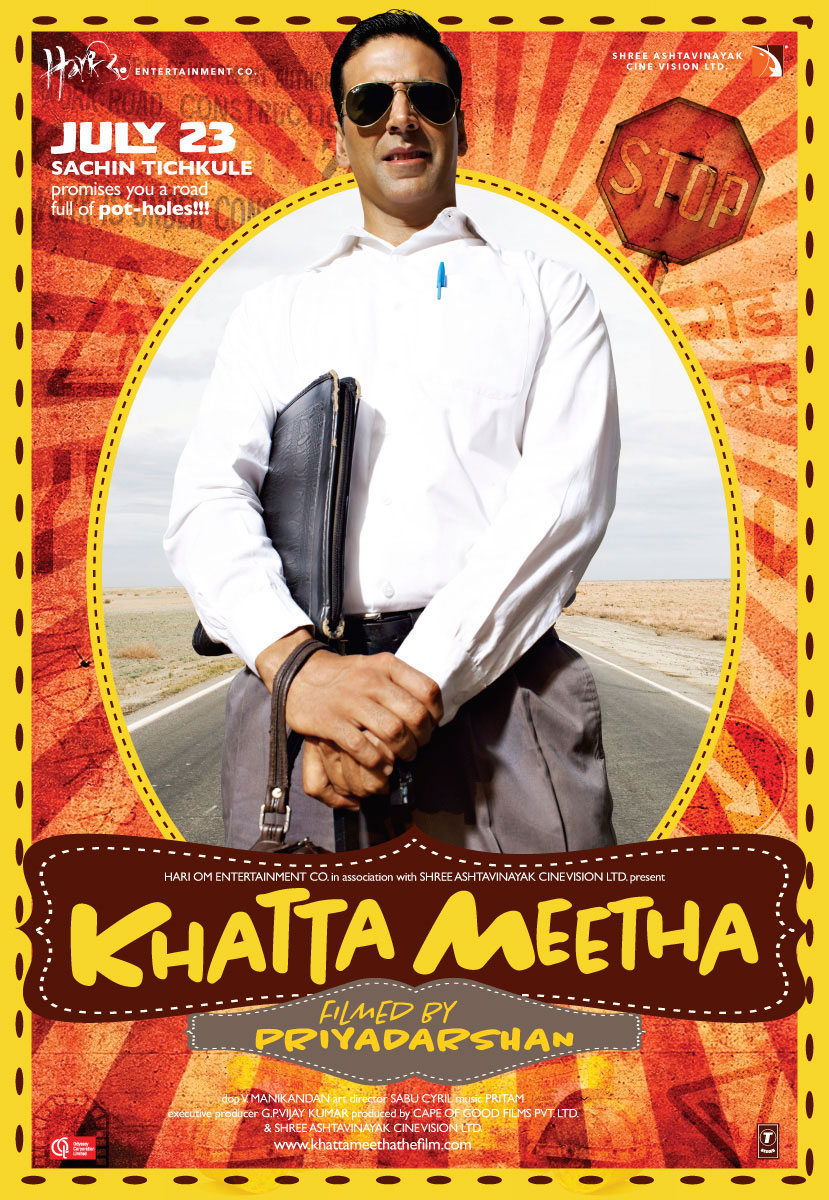 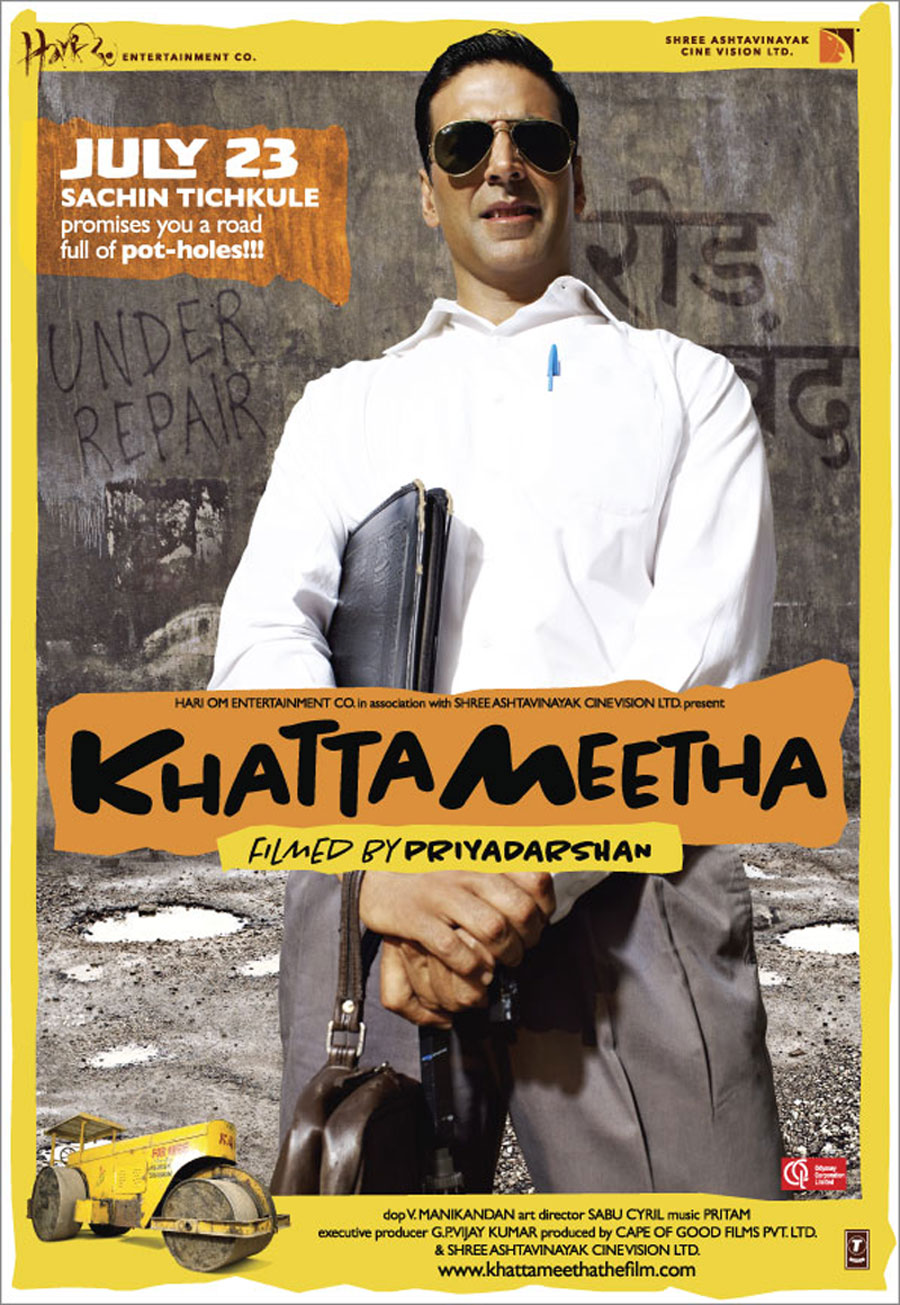 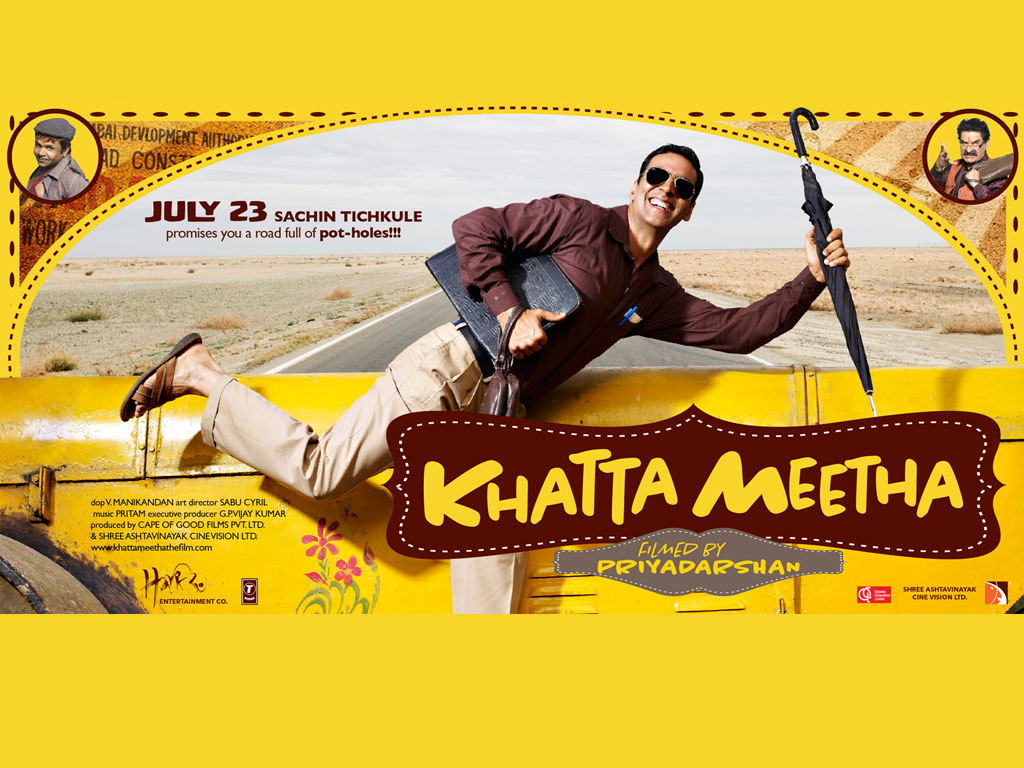 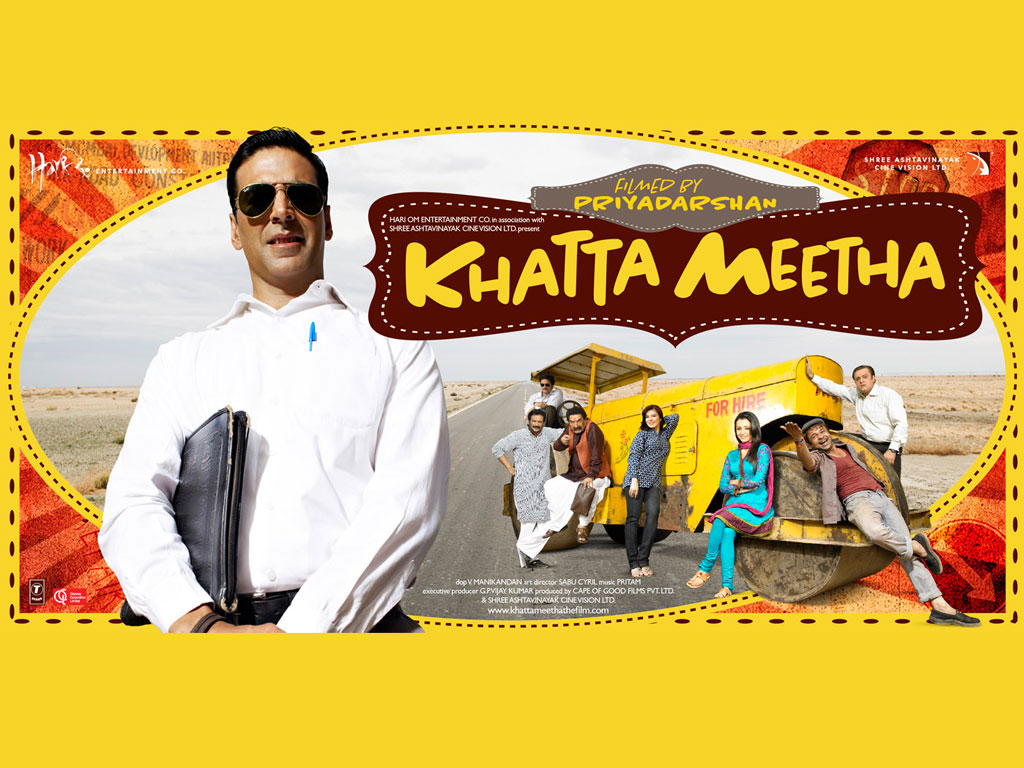